David Alexander recently released his second chapbook, Modern Warfare, from Anstruther Press. Alexander’s poems have appeared in journals such as Lemon Hound, Poetry is Dead, and The Malahat Review and were shortlisted for the Walrus Poetry Prize (2014), Arc’s Poem of The Year (2014) and the Banff Centre Bliss Carman Poetry Award (2016). Poems from After the Hatching Oven have appeared in subTerrain, CV2 and The Puritan. He lives in Toronto, ON. 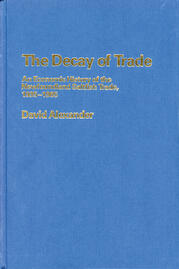 The Decay of Trade